Domain models have often been described as a model that incorporates both behavior and data. A domain model describes the objects used in an application and the relationships between them. g9 is based on a model-driven approach to software development. 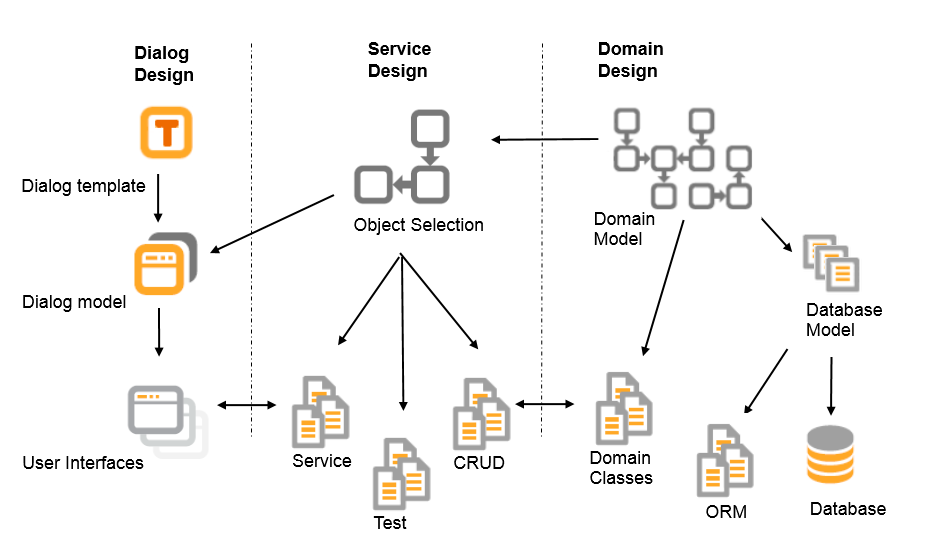 Important concepts and models in g9:

The strength of g9 lies in its ability to integrate with various business modeling tools that support UML. Users can perform full life-cycle modeling for their various applications using the modeling tool to analyse, design, implement, test and maintain their application. Using g9, the user can import the design model and generate various target applications and databases. As the product evolves, the design model can be re-imported and the application regenerated without affecting any previous tailoring or UI modeling. This approach allows for greater control of the application process through the business model.

Enterprise Architect is a comprehensive UML analysis and design tool from Sparx systems. Included with g9 is a g9 UML profile that defines g9 specific elements. The model file (*.eap) can be imported into the g9 project which can then generate the required target application.

For more information about EA: http://www.sparxsystems.com/

The Eclipse Modeling Framework (EMF), an open source project hosted by Eclipse, is a modeling framework for building tools and other applications based on a structured data model.The Ecore format is essentially a sub-set of UML class diagrams that describes object attributes, relationships, operations and constraints and is specified in the Eclipse EMF project. The model file (*.ecore) can be imported into the g9 project which can then generate the required target application.For more information see http://www.eclipse.org/modeling/emf/?project=emf

All plugins and tools that can produce a proper Ecore format, may be used to model g9 artifacts. Within Eclipse is Xcore, a textual representation of Ecore models. Xcore is an extended syntax for Ecore that allows the user to specify not only the model structure, but also the behavior of operations and features as well as conversion logic of data types. See http://wiki.eclipse.org/Xcore

A database model is used to define a a specific database implementation for a target DBMS. The model is generated from the persistent parts of the class model, as defined in the UML model. The model allows for the generation of DBMS schema scripts based on the target DBMS. It also provides for mapping the class objects to the appropriate DB data structures in the run-time application for viewing, modifying, adding and deleting objects. The database model editor provides a tree-based representation of the mapped elements for each target DBMS. This includes columns, groups and procedures.

An object is a subset of a class model that specifies those classes that comprise the information model used by a dialog og a service. Normally, there is one object selection for each dialog specified in the UML model. The object selection is used when modeling a dialog, to generate client code and service code that provides CRUD operations for the dialog.

A dialog template is a collection of properties that default applies to dialogs generated for a specific client target. A dialog model describes the user-interface components used in a specific dialog and is based on an object selection.

The dialog editor provides a tree-based representation as well as a GUI based visualization of the dialog and allows the user to visually modify the dialog.

It generates the client part(s) of the application. The dialog models and their object selections are used when generating the client code.

The domain generator generates Java code (i.e. Java classes, interfaces and enumerators) based on the domain model. The generators can be configured and the generated code can be extended using hooks. Tailor made code is not overwritten when re-generating code.

The Web Service generators are used when developing web services and they generate:

The Object Selection generators generate code for the service part of the application. This includes the code for all necessary CRUD actions.

The database type generators include both the Hibernate generator for mapping the domain model to the DBMS, as well as individual schema generators for the supported databases (Derby, MySQL, Oracle, SQL Server, Sybase and Mimer). Schema generators use the database model specified for the target database.

Create your own generator

g9 supports the creation of user defined generators for generating code into specified target directories. The custom generators support using Xtend for developing generators although generators can be written using Java alone. Xtend is a dialect of Java and is targeted at template programming and text processing. It translates to Java source code but has many improvements and it is fully inter-operable with Java. The Xtend Eclipse plug-in makes it easy to work with Xtend and integrates seamlessly with Java.

Read more about Xtend at http://www.eclipse.org/xtend/

The application generated by g9 is a multi-tier application with the following components:

The rich client interface consists of the following runtime components:

The server side code consists of the following components:

To upgrade g9 to newer versions, a valid license is required.

The g9 licenses is maintained in the Eclipse > Preferences > g9 > License page. It shows information about the current license and may be used to order and install a valid license.

Please contact us by e-mail adm@esito.no to extend your existing license or obtaining a new licence.